Previous editions of Pittsburgh International Festival of Firsts provided a mystical maze that delved into the latest developments in global performance — all decidedly adult. This year there was a deliberate effort to include children’s and family entertainment, perhaps to lure a wider audience to some of the best artists In the world. Like:

Mrs. Krishnan’s Party (New Zealand). Perhaps the title was misleading. And James, who escorted us to our seats had an undeniable New Zealand accent. Mrs. Krishnan herself was pure Indian, sometimes over-the-top, but a New Zealander as well. No matter. This was an Indian story at its big heart, filled with traditions, history and, yes, food. In fact actors Kalyani Nagarajan and Justin Rogers really cook up a meal, ostensibly for the partygoers (us), but members of the audience frequently did the cooking, set the table and more. And the children — too delightful, you couldn’t have asked for better — passed out balloons and laughed contagiously. This was about as immersive as you can get with a live performance. In fact, when James asked an audience member to reveal a secret, she hesitated because she had become so involved. It doesn’t get any better than that. 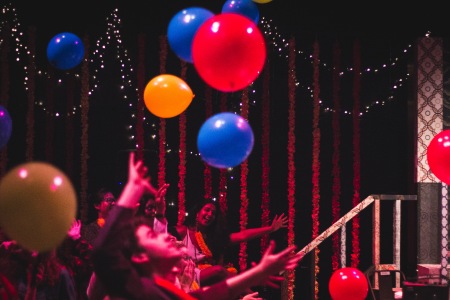 Gab Squad. Gab Bonesso, local comedien and, as it turned out, bullying expert, came up with this program, an extension of her school talk. So Gab was a veteran, capable of dealing with middle/high school, such a tricky age for the arts. She began with a monologue, her audience mostly neutral or, in some cases, resistant. And when she started interacting — there’s that trending word — she settled on one girl who had an interest in Harry Potter. The connection was made. But when Gab began to encourage the students to dance, there was some awkward hesitation. Suddenly the Harry Potter fan jumped up, face bright, the awkwardness disappearing as she began dancing. One by one the students joined in, moving and grooving on the drums as well. It was heart-warming and, I’m sure, transformative. And that’s what the arts are all about. 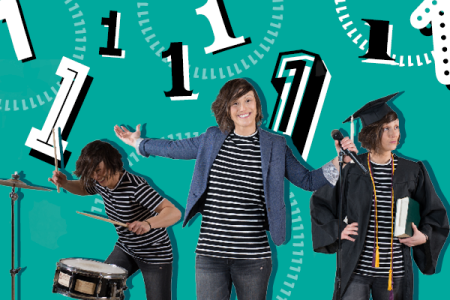 Blind Cinema. I went to the movies. Just don’t ask me the title. Because I went to the Blind Cinema. Yes, I was blindfolded. Just suffice it to say that it was a magical experience, children whispering what they were seeing in little megaphones, like fairy dust on the ear. It’s funny how your other senses take up the slack, a way of brief understanding about some people who do that every day.